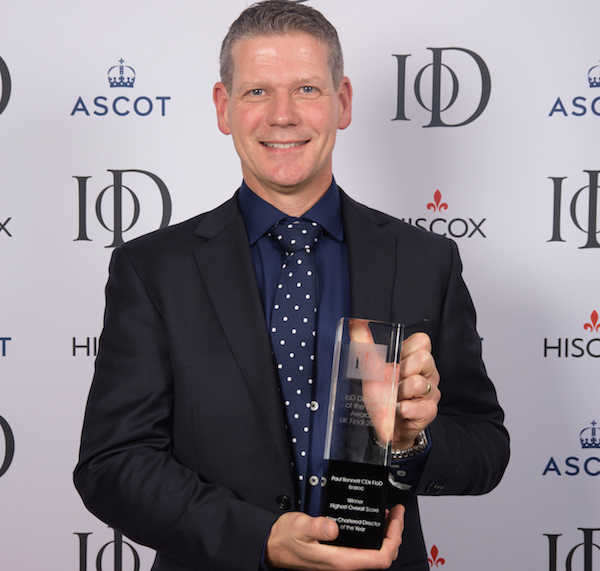 The New Chartered Director of the Year award recognises excellence of achievement across the IoD’s Certificate and Diploma in Company Direction examinations, and in the final assessment for Chartered Director.

Having beaten off competition from across the UK, Paul was shortlisted along with 2 others in September. He was delighted to learn that he’d been their highest scorer in the exams and was subsequently named winner at the Director of the Year Awards at the end of October.

Paul, who is also a Chartered Engineer, became a Chartered Director after 12 months’ of study. He set up BSSEC in 2005, having identified the growing market for low carbon, low energy buildings and the business quickly grew as demand increased for low carbon designs and property audits. The speed of the expansion eventually encouraged him to look for ways to broaden his skills base.

He advises: “To my mind becoming a Chartered Director is an alternative to achieving a fast-tracked MBA for those who already have significant experience, taught by people who themselves have a solid, successful business background. I can honestly say that the experience has transformed our business, particularly in areas such as governance and strategy. I have restructured the board and brought in non-executive directors to strengthen our financial and marketing expertise. We have also developed a strategic plan for the next three years which I’m pleased to say, we’re on track to deliver.”

“Overall, the training has been an immensely positive experience. Energy is a very political and volatile arena to work in – markets and jobs appear and disappear very quickly – so every business within the sector needs to be agile in order to survive. Brexit, of course, has added to the uncertainty and impacted on areas such as investment and spending, at least in the short-term.

“Coming up, we have the government’s energy policy review at the end of this year and the Minimum Energy Efficiency Standards (MEES) regulations in the next 2 years. We are prepared with our response to both.

On the upside, there is a very strong business case for companies to run energy audits and review their energy provision and usage levels. Businesses which save energy, invariably end up saving money – and that’s a message most corporates seem to have heeded, I’m pleased to say.”

“And let’s not forget that the energy sector attracts a great deal of entrepreneurialism, which means it’s fast-moving and there’s a lot of innovation. Aside from my own passion for energy solutions, I find that this ethos makes the sector a really exciting and stimulating space to work in.”

About the IoD Awards

Since its foundation, the IoD has promoted the highest standards of leadership in business and supported directors to build competitive, sustainable and innovative companies. The Director of the Year Awards recognise the great value that business leaders, decision makers and entrepreneurs can bring. Those that have raised the bar, created wealth and inspired the next generation of business leaders. For further information, visit www.iod.com